Knight In My Arms — Stacy Brown 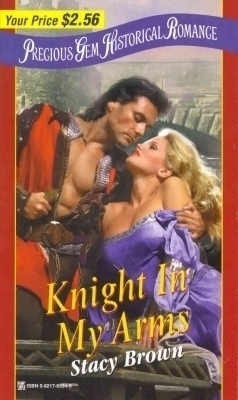 When Norman soldiers stormed her Saxon manor, Brianna fled to a nearby priory, never imagining she would be summoned home to tend a gravely wounded Norman lord. As she nursed him back to health, disguised as a nun, Brianna unexpectedly found herself captivated by the handsome knight. But she learned too late that she had saved the life - and kissed the lips - of the man who'd killed her beloved brother in battle. Furious to discover that his savior was the Saxon baron's daughter in disguise, Rourke Warwicke had Brianna charged with treason. But instead of sending the traitorous beauty to the gallows, the king issued a royal decree that he marry her. It was not long before Rourke's hostility gave way to potent longing for the bride who shared his name...and his bed.
Reviews from Goodreads.com