Blotto, Twinks and the Heir to the Tsar — Simon Brett 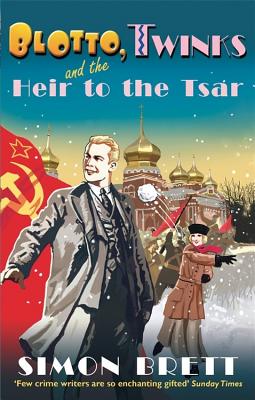 Tawcester Towers, the family seat of the Lyminster family, has suffered an unwelcome injection of distant cousins, so distant that they aren't even British! Count Igor and Count Lyudmilla Bashusky had to flee Russia after the Revolution and have spent the intervening years building up debts in the hotels of Europe's capitals and sponging off ever more exasperated (and distant) relatives.

The Bashusky's arrival at Tawcester Towers causes a stir, and it's up to Blotto and Twinks, that indefatigable duo, to provide a solution to get them back to Russia. Reversing the Russian Revolution and getting a Tsar back into St Petersburg's Winter Palace is just the sort of challenge the fiercely bright Twinks relishes, though her dim-witted brother Blotto shows less aptitude for the subtleties of international politics, despite his commendable bravery.

The siblings soon find themselves in Berlin to try and broker a meeting with the White Russian community, and swiftly become embroiled in a world of spies, counterspies, conspiracies and counter-conspiracies. Just when things seem to be looking up, little do Blotto and Twinks realise that their plans are being monitored by the spymaster Fyodor Vlachko, a former worker on the Bushusky's estate who has now risen to a senior post in the secret police of the newly-formed Soviet Union . . .
Reviews from Goodreads.com