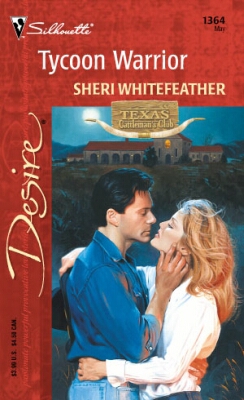 Dakota Lewis wanted only one thing -- his wife! By law, Kathy Lewis was still married to him, but she was not under his roof... in his bed. This bold modern Native-American warrior had faced many fights, but confronting the painful truth of why she'd walked out might be an even tougher ordeal. Bitterly regretting that he hadn't been there when his Kathy needed him most, Dakota was now fully determined never to leave her side again....
Reviews from Goodreads.com

Tycoon Warrior is a book by Sheri Whitefeather in the Texas Cattleman’s Club: Lone Star Jewels series. Dakota Lewis, ex-soldier, is still involved in dangerous missions. And it was during such a mission that his wife, Kathy left him. But she has never told him why, and she is beginning to feel guilty about that. For one thing, she still loves him. For another, she might just be asking something of Dakota that is unreasonable. This is a somewhat tedious romance that pivots on the lack of communication between husband and wife. The hero is rather too perfect; the heroine, simply frustrating. It is part of a series, but can be read as a stand-alone. It would have benefitted from some judicious editing. Mediocre.