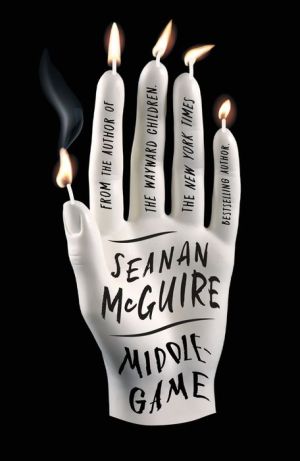 
New York Times bestselling and Alex, Nebula, and Hugo-Award-winning author Seanan McGuire introduces readers to a world of amoral alchemy, shadowy organizations, and impossible cities in the standalone fantasy, Middlegame.
Meet Roger. Skilled with words, languages come easily to him. He instinctively understands how the world works through the power of story.
Meet Dodger, his twin. Numbers are her world, her obsession, her everything. All she understands, she does so through the power of math.
Roger and Dodger aren’t exactly human, though they don’t realise it. They aren’t exactly gods, either. Not entirely. Not yet.
Meet Reed, skilled in the alchemical arts like his progenitor before him. Reed created Dodger and her brother. He’s not their father. Not quite. But he has a plan: to raise the twins to the highest power, to ascend with them and claim their authority as his own.
Godhood is attainable. Pray it isn’t attained.

Named as one of Paste Magazine's 30 Best Fanatsy Novels of the Decade!
Reviews from Goodreads.com

Disclaimer: I received this book for free from NetGalley and Tor Books in exchange for an honest review. This does not affect my opinion of the book or the content of my review.

I have a lot of feelings about this book, and I bounced back and forth a lot about whether or not I enjoyed it. Middlegame is a really smart book, filled with impressive research. Asphodel Baker wanted to change the world by taking humanity to the Impossible City and giving us a utopia… but her successor, Reed, wants to use the Impossible City to rule the world. Reed has spent his career engineering twins to embody the doctrine. When he loses control of the one set of “cuckoos”, he sends his executioner out to solve the problem, but Roger and Dodger are already beginning to manifest….

The alchemical discussions and philosophy in Middlegame are impressive. I like smart books, books that challenge the way I think and make me want to research things just to keep up with them. I also appreciate the way Seanan McGuire weaves contemporary and science fiction together so comfortably. Middlegame is a dystopia in the making, which is something you don’t see a lot. As a reader, I find a lot of post-apocalyptic dystopias, but you usually don’t get to see the fall of society, and Middlegame reeks of that event.

For as fascinating as I thought the concept was, I had a little bit of difficulty with some of the fundamental elements. First of all, the pacing is excruciatingly slow. This is a 500+ page book that could have been done in under 400 pages. I may be a minority here, but I don’t think the pace improved the suspense. There were little scenes and conversation that may have enriched the world, but didn’t do anything for the story. I felt like the heart of the story here was with Roger and Dodger, so scenes with Reed felt unnecessary. That said, I thought checking in with Leigh was good – it offered balance. Has anyone seen Westworld? I’m talking the 1973 film here, not the HBO show. Every once and a while, the scene cuts Yul Brenner’s character as he stalks his prey across the complex. You feel the tension there, that the hunter is closing in. Leigh’s scenes felt like that, especially near the end. I liked how McGuire used those shifts to add suspense.

I don’t think it’s a stretch to say most people are not familiar with The Midwich Cuckoos. I know I wasn’t – this paperback horror novel is referenced constantly in Middlegame. Fortunately, the knowledge I needed was easy enough to Google, but the reliance on this pop culture reference to explain away one of the central elements of the story grated a little. All that said, it was quick and easy research. There’s also edges of Frankenstein in some aspects, but these are really just edges and I think the legend of Frankenstein’s Monster are culturally well-known and shouldn’t throw anyone.

For myself, I find the concept of alchemy fascinating… but. I can see where others may find this book a little odd, subject-wise. There’s easy conversation about the elements and humors. It is definitely adult fiction, though I think a mature young adult could handle it just fine. It’s a very dense novel, and while fascinating, it requires a great deal of patience. It’s very different from other things I’ve read in similar genres, and I do appreciate that facet.

It’s a fascinating novel, and I think fans of Seanan’s will enjoy it. Additionally, if you’re interested in adult dystopias, this may interest you. Also anyone interested in novels including twins and/or alchemy.

Full honesty: I requested this book based on the fact that Destiny @ Howling Libraries talks about Seanan McGuire all the time. I didn’t realize she was the same author of Feed, which I read last year. I thought that one was so smart and I loved it. Now that I know Seanan McGuire and Mira Grant are one-and-the-same, it makes a lot of sense. Both books are well-researched, interesting, and just different enough in overpopulated genres to stand out. 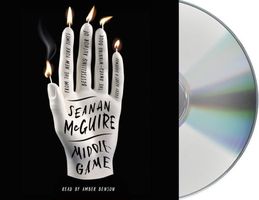