Swords of the Six — Scott Appleton 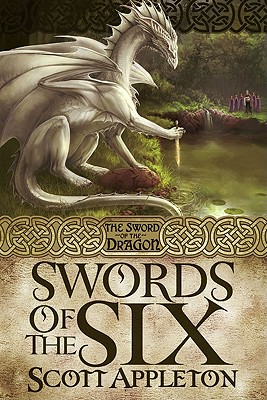 In ancient times a band of warriors escorted a young prince homeward. Only one warrior remained true. He watched helplessly as the others slew their young charge. Death seemed to claim him as well. But he awoke one thousand years later, brought back by the prophets of God to serve them once again as an invisible guardian. One of the prophets, an albino dragon, hatched human daughters out of eggs by giving them the life in his blood. The daughters sought out the traitor to bring him to repentance. Out of remorse for his sins, the traitor slew himself on a sword. Upon the daughters’ return their dragon father sent them to live in a far off forest. The youngest daughter fell in love and wed. But upon giving birth to a beautiful baby girl she gave up the life in her blood and died; making the ultimate sacrifice to bring a child of promise into the world.
Reviews from Goodreads.com