Curse of the Sphinx — Raye Wagner 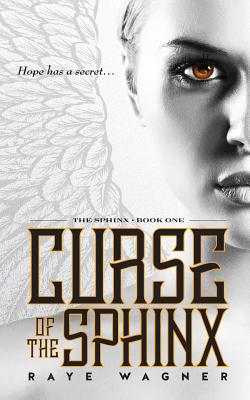 Fans of Percy Jackson and Twilight will love this mash up of mythology and paranormal romance.

A mythical creature. An ancient curse. A forbidden love.

In a modern realm ruled by the Greek gods, Hope has a deadly secret.

Cursed by Apollo, she's considered a monster, an abomination hunted by demigods and gods alike. Forced to live on the run, she moves from town to town, never staying long enough to make friends, let alone fall in love. Just when she believes she's safe, tragedy strikes. Hope moves again, but this time, she's desperate to keep her secret hidden. Even if it means pushing everyone away.

When Athan arrives in town, the attractive young man is persistent in his pursuit. Which should be flattering, but he seems to see right through her. Then shadow-demons from the Underworld attack, and Hope runs out of options. Against the odds, a tentative relationship blossoms, but Athan is hiding something, too.

With demigods and demons closing in, only one thing is certain; their secrets could destroy them both.

The Sphinx series blends urban fantasy with gods, demigods, curses, and romance to challenge teenage and tween concepts of fate, true love, and what defines heroes and monsters. This series is perfect for teens or young adults at heart.


***
"This book is AMAZING! I read it everywhere. It is the perfect mixture of young love, survival, and mythology."
- DELUXE, Amazon reviewer ★★★★★

"The story is addicting and emotionally engaging. I found that I was invested in the extremely well developed characters and and the complex plot. I could not put the book down."
- Hannah, The Not So Public Library ★★★★★

"I can't explain how much I loved this book! I've been really wanting more Greek mythology ever since my obsession with the Percy Jackson series and this did not disappoint!"
-Britt, Amazon Reviewer ★★★★★
Reviews from Goodreads.com