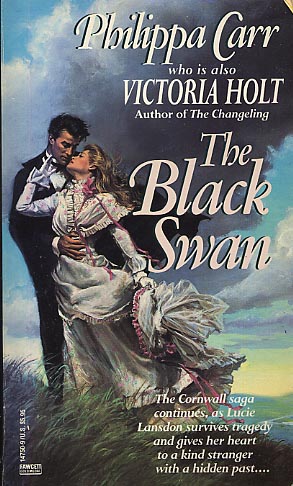 Has she sent the wrong man to the gallows? Or has a killer's ghost come back to haunt her? Only Lucie Lansdon could identify the man who had murdered her father. Justice was served by his execution, but nightmares of that evil face continue to haunt her. In torment, she turns to her fiance Joel Greenham -- only to lose him suddenly, under mysterious circumstances. Yet the idyllic French countryside and loving arms of her new friends, Roland Fitzgerald and his sister, Phillida, ease the pain, and she embarks on a promising new life as Roland's wife. But when they return to England, Lucie discovers the past, too, has returned. There, outside her window, her father's murderer appears, threatening her sanity -- and her life...
Reviews from Goodreads.com

I picked this book not realizing it was a series. Iam hooked. Now I can join the Cornwall saga.
I will begin at the beginning of the Daughters of England. What a wonderful surprise at the end of an awesome read.