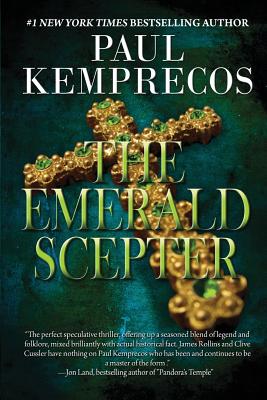 Something bad happened to Matinicus "Matt" Hawkins in Afghanistan. The ex-SEAL was grievously wounded in an ambush that killed men under his command and almost ended his life. When he pushed for an investigation, he was kicked out of the Navy with a psychiatric discharge. The doctors put his shattered leg back together, but the bitterness destroyed his marriage. Five years later, Hawkins is jerked out of his tranquil life as a designer of undersea robots. A super-secret government group wants him to go back to Afghanistan on a strange and dangerous mission. A Georgetown University historian has unearthed evidence that could lead to the fabulous treasure of Prester John, a legendary Christian ruler of an eastern empire. The historian has disappeared, and the government wants Hawkins to track down the treasure as a matter of national security. The centerpiece of the trove, an emerald-encrusted gold scepter, is the linchpin in the Prophet's Necklace, code-name for a plot that is intended to kill more people than the attack on the Twin Towers and rally others to the terrorist cause. Hawkins sees his mission to foil the plot as an opportunity to search for answers. He pulls together an eclectic team that includes his ex-wife, a former comrade-in-arms and a mentally unstable computer whiz. Backed by his unlikely team, Hawkins will travel thousands of miles and hundreds of years on an amazing time-space odyssey. He'll face off against a cold-blooded killer. Probe the underwater secrets of an ancient tomb. Navigate the treacherous stands of an unimaginable conspiracy. And in the process, will discover that there are treasures even more valuable than gold.
Reviews from Goodreads.com