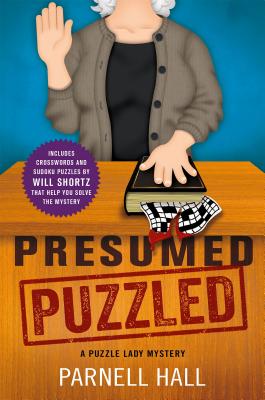 A shocking crime of passion has Bakerhaven buzzing!

The Puzzle Lady gets more than she bargained for when she's hired to track down Paula Martindale's straying husband. She finds him, all right―hacked to pieces on his living room rug, while his blood-drenched wife haunts the crime scene clutching a butcher knife.

It's a tough spot for attractive young attorney Becky Baldwin. Paula is presumed innocent until proven guilty, but try to find one juror who's going to think so.

It's up to Cora to find the evidence to save the day. She has just two problems: She's a witness for the prosecution, and every bit of evidence she finds in Paula's favor, from crossword puzzles to Sudoku to alibi witnesses, tends to indicate that Cora herself is the killer!
Reviews from Goodreads.com