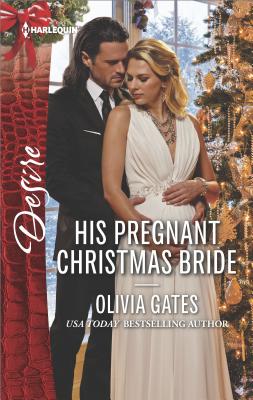 Can a pregnant bride heal this tycoon's tormented past?

Russian billionaire Ivan Konstantinov spent decades struggling with the treachery that almost destroyed him. But when Anastasia Shepherd, the only woman he's ever loved, suffers a near-fatal injury, he risks everything -- even exposure to his betrayers -- to save her.

He intends only to heal her then walk away again, but their explosive passion can't be denied. Then she gives him the ultimate Christmas gift: she's expecting his child. Will the promise of a holiday wedding and a perfect future erase the scars of Ivan's past…or will darker secrets ruin all they hold dear?
Reviews from Goodreads.com

His Pregnant Christmas Bride by Olivia Gates
The Billionaires of Black Castle Series Book Six
Ivan Konstantinov, also known as Ivan the Terrible, has secrets. Unlike his Black Castle brothers...he isn't after revenge. Just avoidance. Seven years ago he had to leave two people behind to avoid his past. And now...he has to rescue them. Even if it brings his past and enemies back.

Anastasia Shepherd almost died. Thanks to Ivan, she's alive. But, he left her suddenly seven years ago and she has to prepare herself for him to leave her again. He will. But until that time, she hopes to enjoy being with him as much as he'll allow her to.

Young prodigies were taken from their families or orphanages as The Organization then trained them in the fields they excelled in. One group of boys...now men...escaped and went on to become billionaires and in turn—slowly destroyed the people who mistreated and held them captive. I really enjoyed this series and I hope the series continues as there were hints of more stories coming.
**Sexual content
http://justjudysjumbles.blogspot.com/2017/09/olivia-gates.html