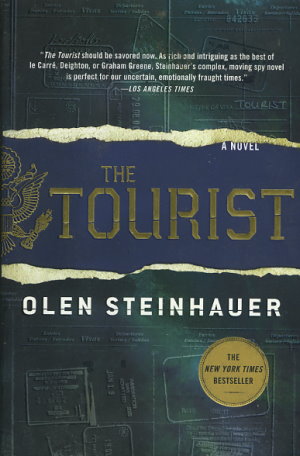 MILO WEAVER has tried to leave his old life of secrets and lies behind by giving up his job as a "tourist" for the CIA -- an undercover agent with no home, no identity -- and working a desk at the CIA's New York headquarters. But when the arrest of a long-sought-after assassin sets off an investigation into an old colleague, exposing new layers of intrigue in Milo's old cases, he has no choice but to go back undercover and find out who's been pulling the strings once and for all.

In The Tourist, Olen Steinhauer -- twice nominated for the Edgar Award -- tackles an intricate story of betrayal and manipulation, loyalty and risk, in an utterly compelling novel that is both thoroughly modern and yet also reminiscent of espionage fiction's most touted luminaries.
Reviews from Goodreads.com

I never would have heard about this book, let alone read it it hadn't been suggested as a January book read from Criminal Element. I thoroughly enjoyed it and now want to read the other books in series. Milo Weaver is a "tourist". In Company-speak (CIA), that means he's an itinerant assassin and spy throughout Europe and the Eastern Bloc. When we first meet him we see Weaver, playing a legend by the name of Charles Alexander, and even though he's in the middle of a very dangerous job for the Company, he is hopped up on amphetamines and contemplating suicide. Being a tourist is not easy. It's not only dangerous, but lonely and exhausting. Milo is a reluctant spy from the beginning, but he is so good at his job that he keeps being put on different assignments. Finally, in 2001, he is very seriously wounded in Vienna, and he also meets the love of his life, who when he first meets her, is in labour on a Viennese street. Milo manages to recover from his injuries, and he moves back to a desk job with the Company after he marries Tina. That lasts for about six years, and then he is pulled into another job that threatens all he holds dear and puts him in grave danger. The rest of the book is all about Milo trying to piece together who in the Company is in league with the Chinese and why. His task threatens his marriage and child, and even though Milo is reluctant to be drawn back in, he must find out who has behind all the intrigue and who has been pulling his strings since he began with the company? This is a surprisingly literate spy thriller, and the reluctant protagonist makes the book very believable. I couldn't put it down. Thanks again to Criminal Element for piquing my interest in this series.