The War of Vengeance — Nick Kyme 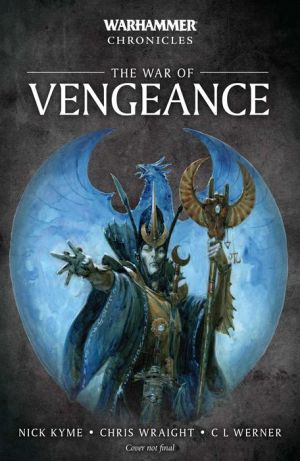 Omnibus of novels telling the complete story of the War of Vengeance, a great and terrible conflict between the elves and dwarfs for domination of the Old World.

Centuries before the rise of Sigmar and the founding of the Empire, the War of Vengeance was a great and terrible conflict between the elves and dwarfs for domination of the Old World. This bitter struggle, which lasted for hundreds of years, left the very earth scarred by the destructive forces unleashed, and forged an enmity that would endure until the world's ending. The three novels in this collection chart the course of this long and bitter war, from its tragic beginnings to the final confrontation that would bring both races to their knees and begin the slow doom of their civilizations... This omnibus contains the complete War of Vengeance trilogy, comprising the novels The Great Betrayal by Nick Kyme, Master of Dragons by Chris Wraight and Curse of the Phoenix Crown by C L Werner.
Reviews from Goodreads.com