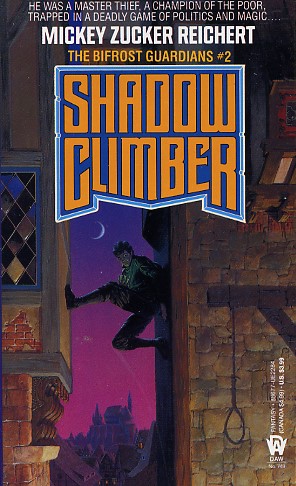 THE THIEF AND THE BARBARIAN--
His father wrongly executed when he was a child, Taziar Medakan had turned to stealing for his survival. He was the Shadow Climber, skilled at remaining one with the shadows, unseen in the midst of his enemies. And he stole not for profit but for the challenge of it, donating most of his booty to those in need.

But though Taz could defeat any trap, he wasn't prepared for the treachery of Ilyrian, a cunning politician ready to sacrifice the Shadow Climber to gain power himself. So Taz found himself in the baron's dreaded dungeons from which even a master thief's only escape might be death!

There he met Moonbear, a prince among barbarians, a swordsman beyond compare, and Taz's last hope for salvation. Together the two sought their pathway to freedom. But it was a pathway that would set a whole kingdom on their trail in a pursuit led by Ilyrian and a Dragonrank sorcerer on his own mission of magical revenge....
Reviews from Goodreads.com