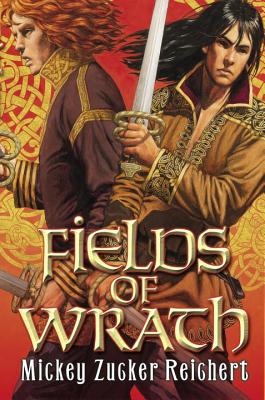 Nearly two decades ago, Mickey Zucker Reichert introduced fantasy readers to her greatest creation -- the Renshai, a race of warriors who lived for battle and swordcraft, and who began training in the art of war from the moment their fingers could grasp a weapon. Set in a world enriched by Norse mythology, Mickey's first two trilogies about the Renshai -- The Last of the Renshai and The Renshai Chronicles -- captivated readers as they followed the adventures of these legendary warriors who fought their way back from almost total extinction to claim a new homeland and find allies in a world where far too many still feared and despised them.

Flight of the Renshai and Fields of Wrath continue the Renshai saga begun in the previous two trilogies. Opening eighteen years after The Children of Wrath ended, Flight of the Renshai focuses on the main characters from the second trilogy, as well as their now-grown children. At the center of the story are the three sons of Kevral Tainharsdatter. While Flight brings readers into the heart of the long-dreaded Great War, Fields of Wrath picks up the story in the aftermath of that war.

With the Great War over, the Renshai have won back the Fields of Wrath. However, Tae Kahn -- Subikahn's father -- becomes ever more certain that a far larger and fiercer wave of enemy soldiers is headed toward them.

One Kjempemagiska and an army of their man-sized servants nearly defeated the entirety of the continent. This time, Tae is certain, the ranks will include hundreds of these strong, magical, Island-dwelling giants. The only hope for the peoples of the continent is to regather their war-weary troops and find a way to convince the few magical beings of their own world to assist them.

Unfortunately for Tae, no allies are available to assist.

It becomes a race against time as Tae and his friends struggle to convince the various Continental generals of the danger, attempt to turn reluctant, antagonistic mages and elves into allies, spy on the giant Kjempemagiska sorcerers, and seek some means to defeat an enemy powerful beyond contemplation.
Reviews from Goodreads.com