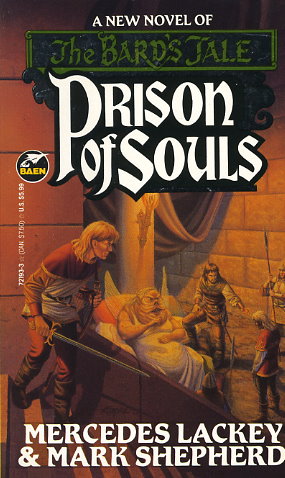 THE HEROES
The hero of the first Bard's Tale novel, Castle of Deception, is now a very old man, but his mentor, the Dark Elf Naitachal, is still going strong and training new apprentices. His latest: the King's own son, Alaire.

THE MISSION
Alaire is an apt pupil, but before he has had a chance to master the secrets of Bardic power, he and Naitachal are sent by the King on a dangerous diplomatic mission. The kingdom on King Reynard's northern border, Suinomen, has banned magic for years, and now is making preparations for war. Their job: find out why their previously peaceful neighbor is making war noises, discover what's behind it, and stop it.

THE CATCH
They cannot use their innate Bardic magic. Unlicensed use of magic in Suinomen earns the wielder a sentence in the Prison of Souls, a punishment which not only takes the magic user off the streets, but which eats away at a magic user's very life force....