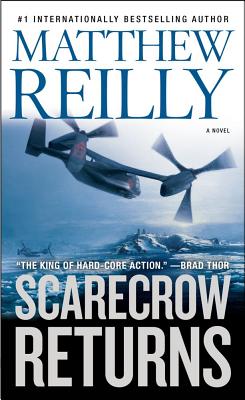 SCARECROW IS BACK AND READY FOR ACTION

Deep in the Arctic, a long-forgotten Soviet military base enshrouds a weapon of unimaginably destructive force -- a Cold War doomsday device with the power to obliterate the planet. When a mysterious and brutal terrorist group known as the Army of Thieves seizes control of the remote base and unleashes the weapon upon an unsuspecting world, there is only one team close enough to sabotage them: a ragtag band of Marines and civilians led by Captain Shane Schofield, call sign "Scarecrow." Outnumbered, outgunned, and with the fate of humanity hanging in the balance, Scarecrow has only a few short hours to bring down the Army of Thieves -- or see the Earth go up in flames.

Filled with nonstop action and told in Matthew Reilly's characteristically white-knuckle prose, Scarecrow Returns is a work of gripping suspense and complete exhilaration.
Reviews from Goodreads.com