Whispers on the Wind — Maryn Langer 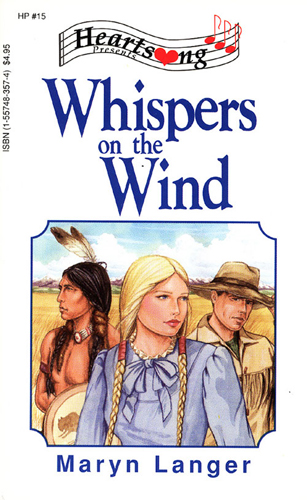 Sworn enemies, the Army scout and the Comanche chief have a vendetta to settle once and for all. But more than avenging the murder of their families is the matter of Esther Wheeler, the tall, golden princess of the prairie, who has captured both their hearts. Bent on taking her healing skill and her strong faith in God to the western frontier, Esther finds a more immediate mission among people she meets along the Oregon Trail--

Jasmine Waite--the fiery, flame-haired do-gooder who must learn that one should never judge another until she has walked a mile in her moccasins.

Brook Savage--the Army scout who roams the trackless wilderness in search of the one man responsible for his greatest loss, and discovers his greatest treasure.

Running Elk--the Comanche chief who carries Esther away, only to find that she is his captor.

A duel to the death pits the white man and the Indian against each other and against God in the final grim showdown. Is it too late for a miracle of love?
Reviews from Goodreads.com