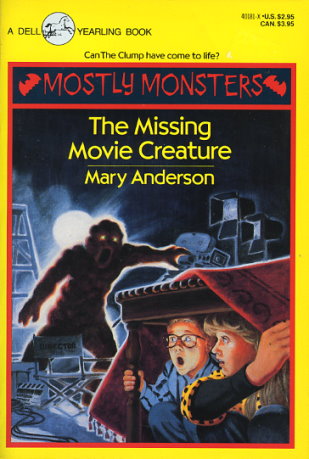 Cassie and Barney are cousins who have nothing in common except that both admit they've never seen a monster.. Cassie has been dumped in boarding schools all her life and she considers her poor nine-year-old cousin Barney Prescott to be a major wimp. He deeply dislikes her. They are stuck together for a year.

In THE MISSING MOVIE CREATURE Cassie and Barney hurry to Hollywood with Aunt Alex when a studio's picture runs over budget. Aunt Alex is a major stockholder of the studio and must protect her investment. The Monster Master; the movie in question, is a splatter thriller about monstrous murders on a horror movie set. Aunt Alex feels the movie is being sabotaged.

Then Cassie and Barney discover that The Clump, a creature made of clay for the movie, is missing. Who would want to take it? Could it really have come to life? And is it on the loose?