Since You've Been Gone — Marta Perry 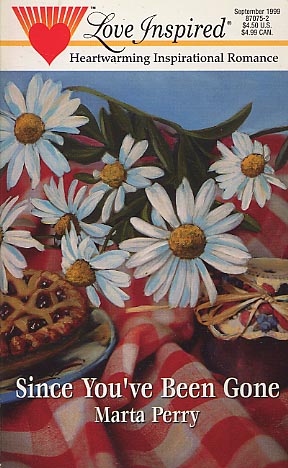 NICK O'NEILL WAS BACK

Suddenly Nick was back. Rich, powerful--and ready for revenge. Worse, the dark, dangerous prodigal seemed to enchant poor Emily anew. To inspire outright hero-worship in her fatherless twin sons. Did Emily have a prayer of softening Nick's heart? No matter what people said, she had to try. Because, Heaven help her, she was falling in love with Nick all over again ....
Reviews from Goodreads.com

Emily and Nick were in love a long time ago. But after Nick's father was falsely accused and was told to leave town, Emily refused to go with him.

Now Nick was back. He was back to work on a merger between the mill his father used to work for and the company he works for. He and Emily started spending time together, but Emily had no idea that Nick was our for revenge...

1. First of all, Nick seemed to hover. He invited himself to supper several times and seemed to find excuses to just barge in on Emily's family time with her son. This made me very uncomfortable.

2. Nick was a jerk, plain and simple. What he did to the town that had once again accepted him was very low. and I don't think the boys or Emily should have taken him back! He said he loved Emily and her sons, yet he participated in such an underhanded way of getting revenge.

3. I didn't see that Nick was a Christian. He hadn't been in church since forever, and the only reason he showed up in church was to see Emily and her sons. I never saw a conversion, and wonder if he ever did "get" what life was all about...

Regardless of the above things, I did find myself liking Nick. I loved the way he treated the boys, but I cannot give this book anymore than three stars because of what he did to those he loved...There were just too many issues.