Will of the Wanderer — Margaret Weis; Tracy Hickman 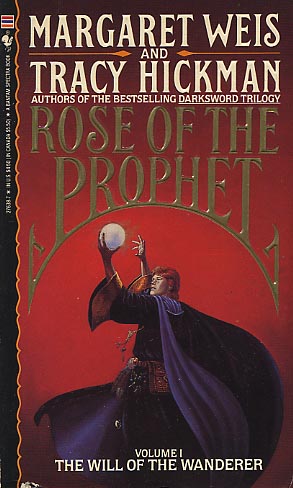 Here is the epic tale of the Great War of the Gods--and the proud people upon whom the fate of the world depends. When the God of the desert, Akhran the Wanderer, declares that two clans must band together despite their centuries-old rivalry, their first response is outrage. But they are a devout people and so reluctantly bow to his bidding.

Enemies from birth, the headstrong Prince Khardan and impetuous Princess Zohra must unite in marriage to stop Quar, the God of Reality, Greed, and Law, from enslaving their people.

But can Khardan and Zohra keep from betraying each other? Can their two peoples maintain their fragile alliance until the long-awaited flowering of the legendary Rose of the Prophet?

Against the powerful legions of the evil Amir, Khardan and Zohra fight to save the desert people--a fight unexpectedly joined by an exiled wizard named Mathew and the mysterious powers of his alien land.
Reviews from Goodreads.com