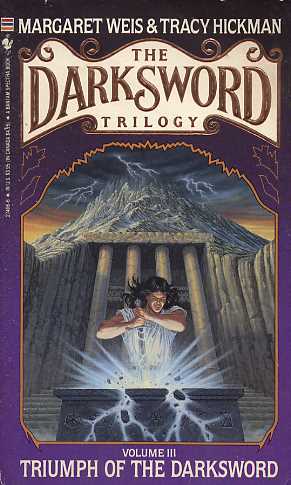 In a realm where magic is life, Joram was one of the Dead. Born without power, he was denied his royal birthright and sentenced to the Turning--his mind to be imprisoned inside a husk of living stone.

Yet at the last moment, Saryon took his place, suffering the eternal torment for his young master. And Joram and his wife Gwendolyn vanished into the mists that marked the Border of the World...

Now, ten years later, Joram and Gwendolyn have returned to reclaim their rightful place in Merilon. Wielding one last time the terrible, magic-thirsting Darksword, Joram must confront the evil sorcerer Menju and his army of Technologists from beyond the Border in a final apocalyptic battle.

Rejoined by Saryon, the mage Mosiah and Simkin, Joram will fulfill the ancient prophecy of the Darksword--the prophecy that puts in his hands the power to destroy the world...or save it.
Reviews from Goodreads.com