The Paladin of the Night — Margaret Weis; Tracy Hickman 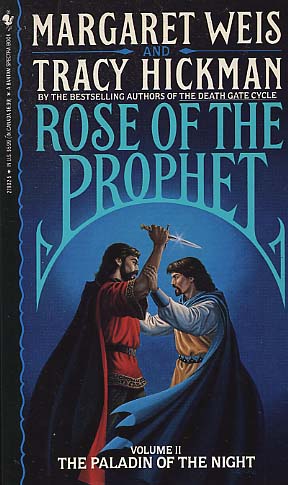 The Great War of the Gods means nothing to the proud people on the mortal plane--until Akhran the Wandering God decrees the union of two mighty feuding clans Though the families are fierce warriors, they are few in number. Even the marriage of Khardan and Zohra is not enough to overpower the strength of the invading army or prevent the imprisonment of their peoples.

Now, with Khardan and Zohra mysteriously missing--seeming cowards who hid from certain defeat--the two clans have lost all hope of ever again seeing their beloved open skies.

But Prince Khardan and Princess Zohra, aided by the wizard Mathew, have been given another mission ...a mission that at first seems less useful than counting the many grains of the desert sands, but soon proves to be of far more lasting importance.
Reviews from Goodreads.com