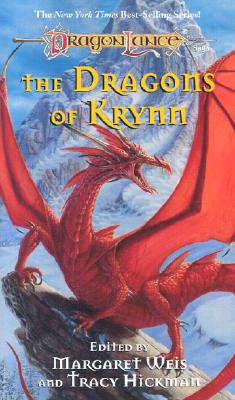 In this one-of-a-kind collection, you'll find:

An elite corps of bridge-building draconians.
A solamni stalking a dangerous spectre.
A minotaur captured by a dark wizard and put to a cruel and unusual test.
Kender who pilfer magic, gully dwarves who cook a delicious rat sstew, and gnomes who invent whatchamacallits that wreak spectacular havoc.
Plus, all manner and hue of dragons, good, evil, and just plain mischievous.


"Seven Hymns of the Dragon" by Michael Williams
"The Final Touch" by Michael and Teri Williams
"Night of Falling Stars" by Nancy Varian Berberick
"Honor Is All" by Mickey Zucker Reichart
"Easy Pickings" by Douglas Niles
"A Dragon to the Core" by Roger E. Moore
"Dragon Breath" by Nick O'Donohoe
"Fool's Gold" by Jeff Grubb
"Scourge of the Wicked Kendragon" by Janet Pack
"And Baby Makes Three" by Amy Stout
"The First Dragonarmy Bridging Company" by Don Perrin
"The Middle of Nowhere" by Dan Harnden
"Kaz and the Dragon's Children" by Richard A. Knaak
"Into the Light" by Linda P. Baker
"The Best" by Margaret Weis
"The Hunt" by Kevin Stein
Reviews from Goodreads.com