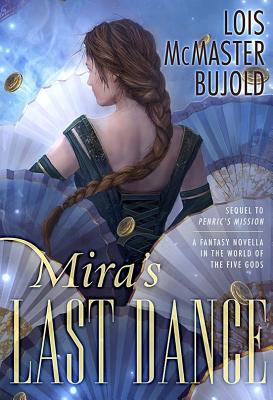 In this sequel to the novella “Penric’s Mission”, the injured Penric, a Temple sorcerer and learned divine, tries to guide the betrayed General Arisaydia and his widowed sister Nikys across the last hundred miles of hostile Cedonia to safety in the Duchy of Orbas. In the town of Sosie the fugitive party encounters unexpected delays, and even more unexpected opportunities and hazards, as the courtesan Mira of Adria, one of the ten dead women whose imprints make up the personality of the chaos demon Desdemona, comes to the fore with her own special expertise.

Fourth novella in the “Penric and Desdemona” series.

“A novella filled with a satisfying blend of strong characters and wry humor.” (re Penric’s Demon)
- Publisher’s Weekly

“Bujold couldn't characterize badly if threatened with a firing squad, and what really keeps one turning the pages is the fascinating cast of characters.” (re PALADIN OF SOULS)
- Booklist

“Bujold's reworking of a classic romantic situation is distinguished by its setting in a well-crafted world and masterly creation of characters whose fates will keep readers turning the pages.” (re THE HALLOWED HUNT)
- Booklist

about the author:
Lois McMaster Bujold was born in 1949, the daughter of an engineering professor at Ohio State University, from whom she picked up her early interest in science fiction. She now lives in Minneapolis, and has two grown children. She began writing with the aim of professional publication in 1982. She wrote three novels in three years; in October of 1985, all three sold to Baen Books, launching her career. Bujold went on to write many other books for Baen, mostly featuring her popular character Miles Naismith Vorkosigan, his family, friends, and enemies. Her books have been translated into over twenty languages. Her fantasy from Eos includes the award-winning Chalion series and the Sharing Knife series.