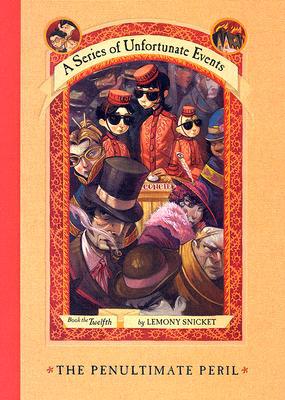 If this is the first book you found while searching for a book to read next, then the first thing you should know is that this next-to-last book is what you should put down first. Sadly, this book presents the next-to-last chronicle of the lives of the Baudelaire orphans, and it is next-to-first in its supply of misery, despair, and unpleasantness.

Probably the next-to-last things you would like to read about are a harpoon gun, a rooftop sunbathing salon, two mysterious initials, three unidentified triplets, a notorious villain, and an unsavory curry.

With all due respect,
Lemony Snicket
Reviews from Goodreads.com

The Penultimate Peril is the twelfth book in A Series of Unfortunate Events by American author, Lemony Snicket (aka Daniel Handler). As we once again join the unlucky Baudelaire orphans, they find themselves in a taxi on the way to the Hotel Denouement.

Having narrowly escaped a burning hospital and already suffered the loss of their parents, the threat of marriage, slave labour, hypnosis, a terrible boarding school, being thrown down a lift shaft, being thrown in jail, acting in a freak show, being thrown off a mountain, almost dying from a lethal fungus and the murder of their Uncle Monty and Aunt Josephine at the hands of the evil Count Olaf and his nefarious assistants, the siblings are ever-vigilant of his reappearance. Luckily these well-mannered and uncomplaining children are also very resourceful: Violet invents, Klaus researches and Sunny cooks.

Snicket’s tone throughout is apologetic, sincere and matter-of-fact as he relates the unfortunate events in the children’s lives; his imaginative and even surreptitiously educational style will hold much appeal for younger readers, as will the persistent silliness of adults. Snicket’s word and phrase definitions are often hilarious. As always, the alliterative titles are delightful and Brett Helquist provides some wonderfully evocative illustrations.

This instalment sees the Baudelaires finally reaching the Hotel Denouement, where they dress as concierges to carry out observations of hotel guests: telling apart noble volunteers from treacherous villains proves difficult. They encounter most of their noble friends, many of whose foolish acts disappointed them, and those under whose charge they suffered much during all their adventures since they became orphans. A confrontation with Count Olaf and a harpoon has a very unfortunate outcome, and Count Olaf and the siblings stand trial to determine their innocence or guilt.

The theme of responsible adults letting down the siblings with foolish actions at every turn is getting a wee bit tired. All three Baudelaires are involved in acts which would not be considered noble, even if their intentions are pure: the story takes rather a black turn. The denouement of this extended tale is rather long and drawn out, and some readers may be relieved to have only one more book to complete the series, the thirteenth and final book aptly being titled The End. 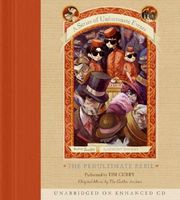