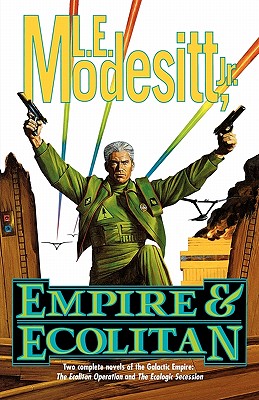 
This is an omnibus of two early novels in New York Times bestselling author L.E. Modesitt's Ecolitan Matter series, The Ecolitan Operation and The Ecologic Secession.
Major Jimjoy Earle Wright, secret agent of the Empire, succeeds all too well in overthrowing a military dictatorship―and the result is a new government inimical to the Empire and disgrace for Jimjoy. After two assassination attempts, Jimjoy realizes that his worst enemies could become his best friends. Fighting his way to safety within the Ecolitan Institute, he becomes James Joyson Whaler, Ecolitan, joining a war of independence against the inconceivably superior forces of the Empire.
Other Series by L.E. Modesitt, Jr.
The Saga of Recluce
The Imager Portfolio
The Corean Chronicles
The Spellsong Cycle
The Ghost Books
The Ecolitan Matter
The Forever Hero
Timegod's World
Other Books
The Green Progression
Hammer of Darkness
The Parafaith War
Adiamante
Gravity Dreams
The Octagonal Raven
Archform: Beauty
The Ethos Effect
Flash
The Eternity Artifact
The Elysium Commission
Viewpoints Critical
Haze
Empress of Eternity
The One-Eyed Man
Solar Express
Reviews from Goodreads.com