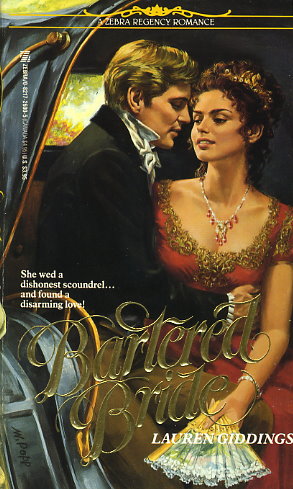 SHE WED WITH RELUCTANCE
Rosalind Dunstan's father had always been high-handed, but buying her a husband was the last straw. Though Geoffrey Chilton had quite managed to steal her spinsterish heart, Rosalind sensibly reminded herself of the perils of trusting a man whose affections could be bought. Besides, his true sentiments would be evident enough once he learned that her inheritance hinged on producing an heir in one year's time... for she had no intention of consummating their hypocritical union. She knew Geoffrey to be a womanizer and a scoundrel and she refused to believe the passion in his deep blue eyes!

HE WOOED WITH PERSISTENCE
Geoffrey Chilton found marriage an unexpectedly frustrating coil. His bride was determined to think only the worst of him, and though he had in the past often deserved such scorn from the fairer sex, his intentions were now of the purest order. He would need to take considerable care to free himself of past indiscretions, but it would all be worthwhile if he could persuade the delicious Miss Dunstan to be his beloved as well as his sweet Bartered Bride
Reviews from Goodreads.com