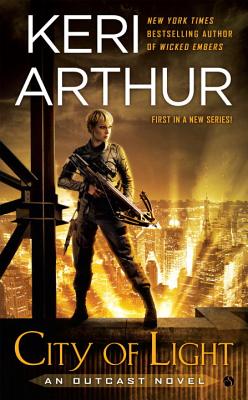 When the bombs that stopped the species war tore holes in the veil between this world and the next, they allowed entry to the Others -- demons, wraiths, and death spirits who turned the shadows into their hunting grounds. Now, a hundred years later, humans and shifters alike live in artificially lit cities designed to keep the darkness at bay....

As a déchet -- a breed of humanoid super-soldiers almost eradicated by the war -- Tiger has spent her life in hiding. But when she risks her life to save a little girl on the outskirts of Central City, she discovers that the child is one of many abducted in broad daylight by a wraith-like being -- an impossibility with dangerous implications for everyone on earth.

Because if the light is no longer enough to protect them, nowhere is safe...
Reviews from Goodreads.com

The shadows have become the hunting grounds for demons, wraiths and death spirits leaving cities of artificial lights as the only safe places to be but when Tiger rescues a little girl she discovers that the light may no longer be enough to protect them in this thrilling start to a new urban fantasy series.

As a déchet, Tiger has spent her life in hiding and the reader can’t help but get caught up in the pulse pounding excitement as Tiger discovers that the child is one of many abducted in broad daylight. Spine tingling tension builds as the danger escalates with lots of pressures and tension between Tiger and the shapehifters who want her help rescuing the children due to past conflicts and issues which also has lots of emotional turmoil flowing from the pages as they try to work together as well causing some adrenaline pumping excitement. There is some sex scenes in the story but not a lot of romance although there is quite a bit of sizzling sexual tension building between Tiger and one of the shifters, no matter how much they try to ignore it.

The well written scenes and details paint vivid images of this intriguing futuristic world that is full of interesting elements as the world mixes a bit of science fiction with the paranormal into a post-apocalyptic world where there is lots of dangerous excitement to be found. The characters are strong, compelling and draw the readers in while the fast paced, smooth flowing plot thrills readers with lots of suspense action and turmoil.

Once again, Keri Arthur has built an amazing new world that kept me glued to the pages and the heroine, kicks butt but is completely realistic and has many fascinating qualities and refreshing differences that I can’t wait to find out more about.