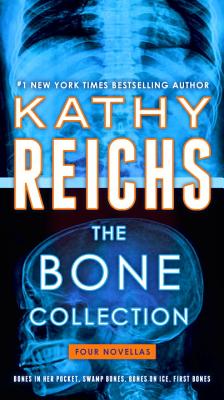 A collection of pulse-pounding tales featuring forensic anthropologist Temperance Brennan -- including the untold story of her first case!

In First Bones, a prequel to Reichs's first novel, Déjà Dead, she at last reveals the tale of how Tempe became a forensic anthropologist. In this never-before-published story, Tempe recalls the case that lured her from a promising career in academia into the grim but addictive world of criminal investigation. (It all began with a visit from a pair of detectives -- and a John Doe recovered from an arson scene in a trailer.) The collection is rounded out with three more stories that take Tempe from the low country of the Florida Everglades, where she makes a grisly discovery in the stomach of an eighteen-foot Burmese python, to the heights of Mount Everest, where a frozen corpse is unearthed. No matter where she goes, Tempe's cases make for the most gripping reading.
Reviews from Goodreads.com

The Bone Collection: Four Novellas is an omnibus of novellas in the Temperance Brennan series by forensic anthropologist and popular American author, Kathy Reichs. Three of the novellas have been published in electronic form earlier; First Bones is a new story.

Bones in her Pocket: Tempe is called out to an Artists Colony at Mountain Island Lake in North Carolina, where a bag of bones has washed up. Tempe assumed that this is part of the corpse belonging to some leg bones she has examined, until she finds this corpse already has legs. Masses of tiny bones accompanying the skeleton add an element of intrigue.

This little story has a missing Environmental Sciences student, a crazy-sounding, arrogant environmental protestor, a lecherous lecturer and a gossipy museum volunteer. Tempe gives us interesting tidbits on under water decomps and manages to get herself into hot water.

Swamp Bones: In Florida’s Everglades for a break at the invitation of Dr Lisa Robbins, forensic ornithologist, Tempe finds that March is already hot and sticky. Before she even gets a chance to cool down and relax, she manages to get drawn into a murder investigation as she idly rummages through the stomach contents of a Burmese python (as you do). Her incidental finds draw the attention of the local sheriff, a wildlife biologist and a National Parks Law Enforcement officer. The investigation into the identity of the likely victim leads to an encounter with a live alligator, the Miccosukee Indian community and some swamp rednecks.

Tempe’s propensity to tackle a situation without support lands her in dangerous waters. Reichs has obviously done quite a bit of research of an ornithological and herpetological nature: this short offering contains plenty of facts about birds and snakes. Who even knew that there was a word for a non-human autopsy?

Bones on Ice: The well-connected Hallis family matriarch insists that Tempe conduct the post mortem on her daughter, whose remains are uncovered after the Nepal earthquake. Brighton Hallis died whilst scaling Mt Everest some three years previously, and her remains were unrecoverable at the time. Tempe finds many things she would expect after three years of exposure to freezing temperatures. But she also finds the unexpected, and her contact with Bright’s climbing companions raises more questions than it answers.

In amongst the suspense and intrigue, Reichs manages to include lots of interesting facts about deaths on Everest, hypothermia and the bizarre associated behaviours, the effects of altitude and temperature on decay and preservation of a corpse, obtaining prints from dehydrated fingers and the effects of freezing on dentition.

First Bones: a prequel to the very first Temperance Brennan novel, Déjà Dead. As Tempe sits at the bedside of a dying friend, she looks back on the case that started her career in forensic anthropology. Tempe’s session of scoring foramina of cremains in the lab at UNCC for her PhD dissertation is disturbed by a request to examine the remains of victim found burnt beyond recognition in a trailer. Her reluctance to abandon her research is outweighed by a convincing argument from a Charlotte-Mecklenburg PD detective. A surprise finding on examination of the remains has her so intrigued, a career change results.

This prequel introduces the arrogant and messy Erskine (Skinny) Slidell, the elegant Eddie Rinaldi, and a man who has been Tempe’s unfailing mentor from the start of her career, Tim Larabee. Husband Pete is still on the scene, and sister Harry also gets a mention. The banter between Tempe and Slidell is often hilarious. This small dose of Tempe Brennan touches on AIDS, the light spectrum for visualisation of ink on documents and forensic dentistry. An excellent Tempe taster.