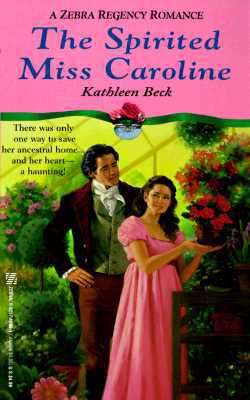 Miss Caroline Garvey had no sooner given up on love and sworn her whole heart to restoring her ancestral home when Fate threatened to snatch it straight out from under her. Caroline's cousin, the rightful heir to Monksend Manor, was forced to marry an American heiress whose family intended to occupy the estate and turn it into an Egyptian-style palace. But she had a plan--produce a raging, rampaging ghost in the hidden passageways to drive away the odious intruders. And Caroline was confident she would triumph--she had no other choice if she was to rid herself of her unwelcome houseguests including Barnabas Cole, the infamous rogue who had once swept her up in passion, only to abruptly end their whirlwind courtship.

Lord Barnabas Cole had made a fortune and a name for himself with Wellington. A military strategist, he meant to use his skills to win back Caroline Garvey who had the audacity to send him a scathing letter, accusing him of toying with her affections. And although his clever nobleman was confident that Caroline still carried a torch for him, his pride demanded that he teach this haughty young woman a lesson in humility. Now, Barnabas planned a haunting of his own that would scare Caroline out of her wits--and into his arms.
Reviews from Goodreads.com