A Time of Exile — Katharine Kerr 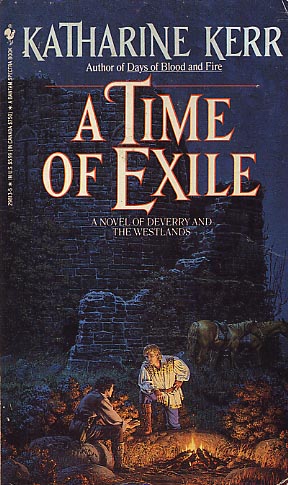 The world of Deverry: an intricate tapestry of fate, past lives, and unfathomable magic. With A Time of Exile, Katharine Kerr opens new territory in the Deverry saga, exploring the history of the Elcyion Lacar, the elves who inhabit the country west of Deverry. It is years since the half-elven Lord Rhodry took the throne of Abtrwyn. When Rhodry's lost lover, Jill--now a powerful wizard-comes to Aberwyn and tells him it's time he accepted his elven heritage, Rhodry faces the most difficult choice of his life. But with Jill's help and that of a human wizard named Aderyn who has lived for years in the Westlands, Rhodry begins to understand how his life is connected not just to his own people, but to the Elcyion Lacar as well. At last, destiny begins to unravel its secrets, revealing Aderyn's true purpose among the elves--and the gods' deeper design behind Rhodry's dual heritage.
Reviews from Goodreads.com