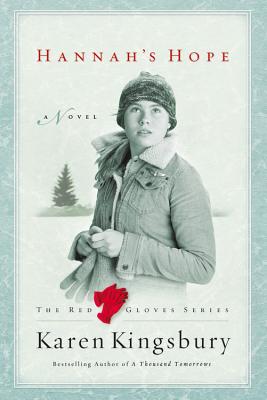 Dear Hannah,
You might not understand what I'm about to tell you, but I think it's time. I wanted to wait until you were eighteen, old enough to check into this information and make some decisions for yourself. Having Christmas alone, you'll have time to think this through.
This is it: Jack isn't your biological father.

Bestselling author Karen Kingsbury's Red Gloves novels have touched the hearts of many. In this final installment of the series, she gives us the unforgettable story of a young woman whose greatest wish is to be loved by her father ...

Fifteen-year-old Hannah Roberts remembers when her father was her closest friend. The image is hazy, though, pulled from isn't much better. Feeling orphaned, Hannah lives a lonely life with her wealthy, ailing grandmother.

But this year is to be different. As Christmas nears, Hannah learns a shocking truth: The man she believes is her father is not her parent after all. In an effort to find answers, she begins a desperate search for her real father--the one she remembers from her past. He is Mike Conner, an Army pilot stationed in Iraq.

A local politician and the newspaper catch wind of her quest, a national TV station posts a letter from her, and soon everyone is caught up in Hannah's hope--that she'll find her father before the holidays.
Reviews from Goodreads.com