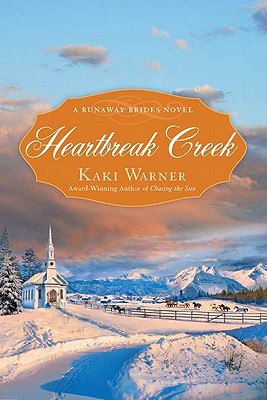 From Kaki Warner comes an exciting new series about four unlikely brides who make their way west-and find love where they least expect it...

Edwina Ladoux hoped becoming a mail-order bride would be her way out of the war- torn South and into a better life, but as soon as she arrives in Heartbreak Creek, Colorado, and meets her hulking, taciturn groom, she realizes she's made a terrible mistake.

Declan Brodie already had one flighty wife who ran off with a gambler before being killed by Indians. He's hoping this new one will be a practical, sturdy farm woman who can help with chores and corral his four rambunctious children. Instead, he gets a skinny Southern princess who doesn't even know how to cook.

Luckily, Edwina and Declan agreed on a three-month courtship period, which should give them time to get the proxy marriage annulled. Except that as the weeks pass, thoughts of annulment turn into hopes for a real marriage- until Declan's first wife returns after being held captive for the last four years. Now an honorable man must choose between duty and desire, and a woman who's never had to fight for anything must do battle for the family she's grown to love...
Reviews from Goodreads.com

Would quickly and readily recommend *Heartbreak Creek*, Kaki Warner's first book in 'The Runaway Brides Trilogy', to any lover of the romance genre, but in particular to those who love a good western romance. Warner told a great story that was so engrossing that it was difficult to put this book down. The features of this book that mark it as a beautifully-written, unforgettable story include: {1} Declan, a big, strong, handsome, alpha hero who portrayed a true pioneer spirit; {2} Edwina, a beautiful, spunky, steel-willed heroine who turned out to be the perfect match for Declan; {3} enough action to keep the story from turning dull; {4} a strong emotional connection to the hero and heroine evidenced by laughter and tears; {5} a touching romance that built between two wounded protagonists; {6} an underlying degree of suspense pervaded the entire story; {7} wonderfully entertaining dialogue between {a} the 'girls' (Edwina, Pru, Lucinda, Maddie) and {b} the 'guys' (Declan and Thomas); {8} infusing a historical ambiance of Colorado in the 1870s; {9} the addition an exceptionally-written secondary characters to the cast; and {10} the prospect of meeting many of these same characters again in future books.