What Happens in London — Julia Quinn

Rumors and Gossip . . . The lifeblood of London

When Olivia Bevelstoke is told that her new neighbor may have killed his fiancee, she doesn't believe it for a second, but, still, how can she help spying on him, just to be sure? So she stakes out a spot near her bedroom window, cleverly concealed by curtains, watches, and waits . . . and discovers a most intriguing man, who is definitely up to something.

Sir Harry Valentine works for the boring branch of the War Office, translating documents vital to national security. He's not a spy, but he's had all the training, and when a gorgeous blonde begins to watch him from her window, he is instantly suspicious. But just when he decides that she's nothing more than an annoyingly nosy debutante, he discovers that she might be engaged to a foreign prince, who might be plotting against England. And when Harry is roped into spying on Olivia, he discovers that he might be falling for her himself . . .
Reviews from Goodreads.com

WHAT HAPPENS IN LONDON - Julia Quinn

They say that my new neighbor, Sir Harry Valentine, killed his fiancée, yet I do not believe it. However, since I have an unobstructed view into his study, I cannot help but watch, and the man is odd. He spends most of his days writing; there have been two occasions where he has flung papers into the fire, and I even spotted him wearing a ridiculous hat one day! I have watched him for two weeks without him noticing. Then, as luck would have it, just days after he catches me, I have the misfortune of encountering the man at a musical. While he may be handsome, he is also very vexing.
–Lady Olivia Bevelstoke

I have determined that the woman watching me from her rooms is nothing more than a bored, yet pretty, young miss. It has been entertaining acting strangely for her benefit, and when I finally got to meet Lady Olivia in person, I found that she is even more beautiful than I had assumed. Then, my superiors at the War Office told me that a certain Russian prince, whose family was sympathetic to Napoleon, has been courting Lady Olivia, and they would like me to find out what I can about the man. Unfortunately, what I am finding out is that I like Lady Olivia a bit more than is wise.
–Sir Harry Valentine

It starts out as a bit of spying between neighbors, but WHAT HAPPENS IN LONDON is romance. Olivia enjoys gossip and is a little bored since her best friend and sister-in-law, Miranda, is in the country awaiting the birth of her second child. It would only have been a quick glimpse of her neighbor had he not intrigued her, but once she meets him, her embarrassment over being caught, and his obvious enjoyment over that embarrassment, causes her to not like him very much. She soon learns he’s not such a bad guy, and friendship comes before romance. It’s the same for Harry; his initial impression that Olivia is a bit foolish undergoes a change as he gets to know her. Their encounters are humorous and friendly and gradually move into romantic.

Other characters include Olivia’s twin brother, Winston, and her parents, the Earl and Countess Rudland, all of whom first appeared in THE SECRET DIARIES OF MISS MIRANDA CHEEVER. Also introduced are Harry’s brother, Edward, and his cousin, Sebastian Grey, whose story should be released next year.

A charming story, WHAT HAPPENS IN LONDON is a book I highly recommend.

Kudos once again to Julia Quinn. She never disappoints. I could not put this one down. The banter between Sir Harry and Lady Olivia, who at first disliked each other, was very enjoyable and highly entertaining. So many laugh out loud scenes. It was nice to have a hero and heroine who don't just lust after each other, but whom you can see are truly well-suited intellectually and personality wise. I also loved how JQ showed that Harry would fit right in with Olivia's family and was on the road to a similarly strong relationship with his brother Edward. 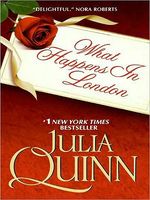