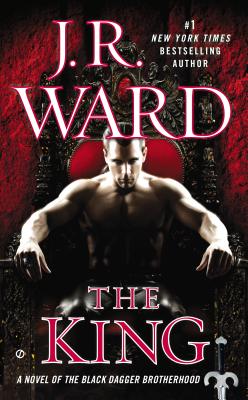 J.R. Ward's # 1 New York Times bestselling Black Dagger Brotherhood continues as a royal bloodline is compromised by a grave threat to the throne.

After turning his back on the throne for centuries, Wrath, son of Wrath, finally assumed his father's mantle--with the help of his beloved mate. But the crown sets heavily on his head. As the war with the Lessening Society rages on, and the threat from the Band of Bastards truly hits home, he is forced to make choices that put everything--and everyone--at risk.

Beth Randall thought she knew what she was getting into when she mated the last pure blooded vampire on the planet: An easy ride was not it. But when she decides she wants a child, she's unprepared for Wrath's response--or the distance it creates between them.

The question is, will true love win out... or tortured legacy take over?
Reviews from Goodreads.com

The King is the 12th book in the popular Black Dagger Brotherhood series by American author, J.R. Ward. While the main plot concerns the King, Wrath, son of Wrath and his Queen, Beth, much of the narrative is also devoted to Assail and Sola Morte (Marisol), Wrath’s parents, Wrath and Anha, Shadow Trez and Selena, and Xcor and Layla. As well as the threat to his rule from the glymera and Xcor’s Band of Bastards, Wrath is trying to deal with Beth’s wish for a baby, something that he is against for several reasons. Sola Morte discovers another side to ruthless drug lord and cold-blooded killer Assail when he sets out rescue her. Shadow iAm’s character is expanded on with a few surprises. Trez finds that his plan to foil his destiny with the s’Hisbe backfires on him when he wants to get closer to Chosen Selena. And the pregnant Chosen Layla makes a secret deal with Xcor. Beth’s cat Boo takes a liking to a household member. A gutsy Sola Morte solves a security thumbprint dilemma with aplomb. The seventeenth century narrative about Wrath and Anha also elucidates the history of the association between the Brotherhood and the King. Lessers and the Band of Bastards make very few appearances in this installment and the noticeable lack of fights will certainly please some readers. A rather atypical member of the glymera who is (somewhat unfortunately) named Abalone (though he is not at all shellfish, sorry, selfish) is instrumental to a rather neat solution to the battle for Wrath’s leadership. This instalment has kidnapping, pregnancy with associated food cravings, birth, a traditional wedding, morning sickness, ultrasounds, a sedative dart, a poison chalice, an epileptic seizure, migraine, vengeance, sparring, a divorce, blackmail, and quite a lot of ice cream. There are a few twists in the plot and while some of the narrative strands are nicely tied up, there is plenty of scope for further novels in the series with several unresolved threads. As always, this is an addictive read and fans will look forward to the 13th book, The Shadows.