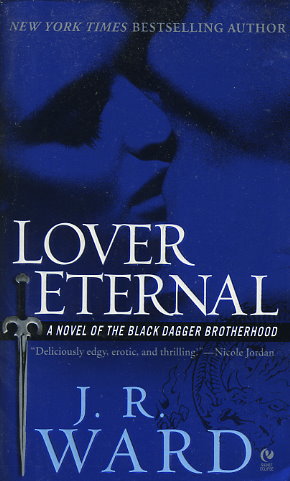 In the shadows of the night in Caldwell New York, there's a deadly turf war raging between vampires and their slayers. There exists a secret band of brothers like no other--six vampire warriors, defenders of their race. Possessed by a deadly beast, Rhage is the most dangerous of the Black Dagger Brotherhood.

Within the brotherhood, Rhage is the vampire with the strongest appetites. He's the best fighter, the quickest to act on his impulses, and the most voracious lover--for inside him burns a ferocious curse cast by the Scribe Virgin. Owned by this dark side, Rhage fears the times when his inner dragon is unleashed, making him a danger to everyone around him.

Mary Luce, a survivor of many hardships, is unwittingly thrown into the vampire world and reliant on Rhage's protection. With a life-threatening curse of her own, Mary is not looking for love. She lost her faith in miracles years ago. But when Rhage's intense animal attraction turns into something more emotional, he knows that he must make Mary his alone. And while their enemies close in, Mary fights desperately to gain life eternal with the one she loves....
Reviews from Goodreads.com

Lover Eternal is Rhage''s story. When Rhage was younger, he was careless and used his killer good looks to get what he wanted. One day Rhage went too far and infuriated the Scribe Virgin. He was cursed for 200 years.rnrnMary Luce is a woman living on