A Question of Proof — Joseph Amiel 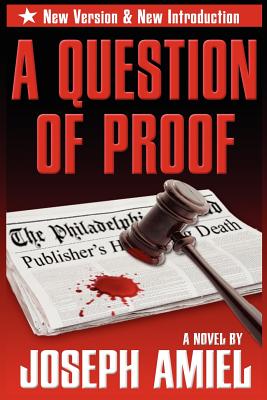 Amiel's courtroom drama features a Jewish lawyer in Philadelphia. Dan Lazar defends low-life clients with high-profile cases, and he's having a tough week. Peter Boelter, owner and publisher of the Philadelphia Herald, prints inside info on Dan's pimp/rapist/killer case; Dan's live-in lover and law partner leaves him for his archenemy -- the smarmy D.A.; a coke-head witness says Dan bribed him before he testified; and Dan's ex-wife takes their kid to California. Susan Boelter has it worse, even though she and husband Peter are perceived as Philadelphia's "golden couple." Peter may run the family paper, but his father bequeathed Susan control of voting stock, and thus enabled her to stop the sale of the Herald to a tabloid mogul. Resentful Peter cleans out their joint accounts and sues for divorce and custody of their daughter, all with the full support of his Boelter relatives. Stymied, Susan turns to Dan for help and they become unlikely -- and public -- lovers. When Peter is found dead, Susan becomes prime suspect, adding to their travails.
Reviews from Goodreads.com