While I Live — John Marsden

THE WAR IS OVER, BUT THE FIGHTING GOES ON...

For Ellie Linton, fighting is supposed to be a thing of the past. The raids, the ambushes, the gunfire -- she wants it all behind her. Being back on her family's farm is what's supposed to make the terrible things that happened during the war all worthwhile. It's where she belongs.

But the war won't let her go. A devastating tragedy hits when she least expects it, shattering the peace. Now she must struggle to survive. It's a new kind of fight -- with some enemies on the other side of the border, and some very close to home.

WHILE I LIVE is a tale of destruction, carnage, and courage -- the powerful story of one girl fighting the odds with all the ammunition she has.
Reviews from Goodreads.com 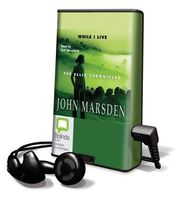