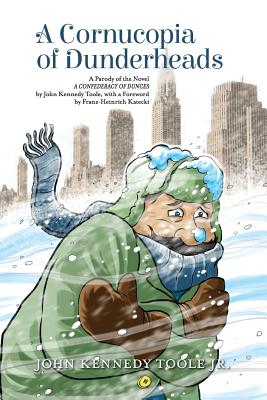 WHAT MIGHT HAVE HAPPENED TO IGNATIUS J. REILLY? In this parody of A CONFEDERACY OF DUNCES by John Kennedy Toole, John Kennedy Toole Jr. plunges Ignatius J. Reilly into a New York City winter wonderland, where our Falstaffian hero inadvertently becomes vice president of the Charlie Chan Chinese Fortune Cookie Company, and where he finds a recently unearthed slip of paper that contains an occult secret for overthrowing the governments of the world (in a most unusual way, of course). Ignatius's parodic adventures would not be complete without his nemesis-friend, Myrna Minkoff. Add to the mix her parents, Mr. Minkoff and Mrs. Minkoff, two inept government agents (is there a redundancy here?), Ignatius's mother, his mother's fiancé, a virago or two, John Kennedy Toole, Ed Sullivan, and Myrna's concupiscent grandmother, Grandmother Horowitz, and you have the ingredients for a parody unlike any other ever written. With a foreword by Franz-Heinrich Katecki.
Reviews from Goodreads.com