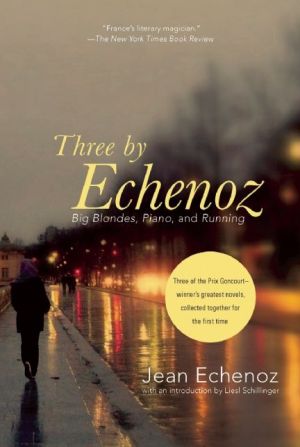 A single volume that gathers together three of the most remarkable novels from Jean Echenoz, the most distinctive French voice of his generation” (The Washington Post), Three by Echenoz demonstrates the award-winning author’s extraordinary versatility and elegant yet playful style at its finest.

A parodic thriller sparkling with wit” (L’Humanité), Big Blondes probes our universal obsession with fame as a television documentary producer tries to track down a renowned singer who has mysteriously disappeared. A darkly comedic, noir-style tour de force, it finally answers the age-old question: do blondes have more fun?

Running is a small wonder of writing and humanity” (L’Express)a portrait of the legendary Czech athlete Emil Zátopek, who became a national hero, winning three gold medals at the 1952 Helsinki Olympics even as he was compelled to face the unyielding realities of life under an authoritarian regime.