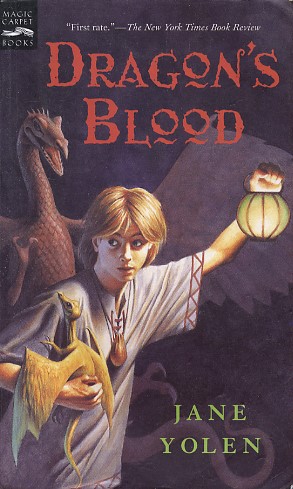 Fifteen-year-old Jakkin Stewart is a bond servant in Master Sarkkhan's dragon barns. Stealing a dragon to secretly train as a fighter is Jakkin's only hope to earn his freedom. But what if he is caught? Or, worse, what if he does not know enough to train his dragon properly to become a true champion?

The young dragon turned its black eyes toward him and Jakkin felt as if he could see strange constellations being born in the endless night of its eyes. "Be thou ever my friend, "Jakkin whispered.

The dragon answered him with a weak trickle of smoke through its nose slits. It was no more than a patch of light fog, then was gone. But that it was smoke, the first conjurings of the fire of a fighting dragon, Jakkin was sure.
Reviews from Goodreads.com