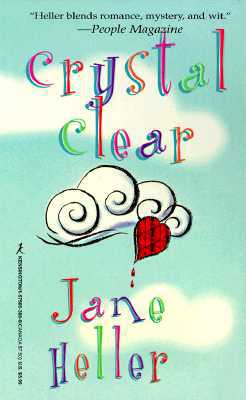 KISSES ... KIDNAPPING ... KARMA
Just another day in the life of Crystal Goldstein.

No one is more surprised than pragmatic New York accountant Crystal Goldtein when at the urging of her best friend Rona--a New Age junkie--she suddenly finds herself on a long-overdue vacation in mystic, metaphysical Sedona, Arizona. After checking into the post Traquility resort, Crystal signs up for the five-day "Sacred Earth Jeep Tour" and settles back, a total skeptic, waiting to be enlightened.

And enlightening it will be. Amanda Wells Reid, the international jet-setter is Crystal's companion. And when the tour driver appears, he is none other than Terry Hollenbeck, the irresistibly handsome, totally irresponsible husband she tossed out years ago.
It doesn't take a psychic to know that the mix of a reappearing ex-husband whose appeal has only ripened and a millionaire heiress who suddenly vanishes is going to add up to some pretty steamy doings. Especially when police try to pin Amanda's suspected kidnapping and murder on Terry's friend, Lakota Sioux Will Singleton--an accusation that has Terry trying to prove his innocence...with Amanda's help.

Searching for clues among Sedona's most eccentric characters, Terry and Crystal stumble onto danger...and into each other's arms. Now Crystal is faced with some unsettling questions about her future. Should she return to her life in New York or chuck it all and stay in Sedona, on the very fringes of reason? It's all in the stars--and in her heart.
Reviews from Goodreads.com