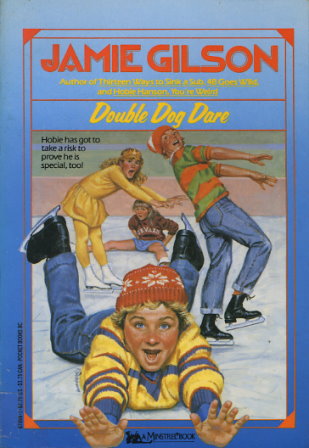 It's the first day of fifth grade and Hobie's already in a jam. His best friend Nick has become a computer camp whiz kid. Molly is a shoo-in for TAG (Talented and Gifted). Lisa was on TV in a Miss Pre Teen contest and now she's a star. Everyone is excited about fifth grade. Everyone but Hobie.

How can he prove that he's special, too? When Amber, the new girl in town, shows him a spectacular lifesaver trick, Hobie has the answer. He'll dazzle them all at Lisa's skating party. Amber has promised not to tell. It's the perfect set up until Hobie risks a Double Dog Dare to show them he has the right stuff: brains and guts galore! Can Hobie pull it off one more time?
Reviews from Goodreads.com