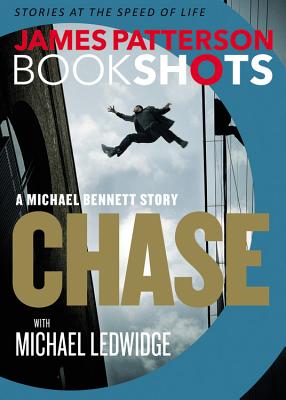 "This was no suicide," says Detective Michael Bennett.

A man plunges to his death from the roof of a Manhattan hotel. It looks like a suicide--except the victim has someone else's fingerprints and $10,000 in cash. Enter Detective Michael Bennett.
Reviews from Goodreads.com

Chase is a novella in the Michael Bennett series by prolific American author, James Patterson. It is co-written with Michael Ledwidge and is released under the Bookshots: stories at the speed of life banner. At a mere 115 pages, it is intended to be a one-sitting read. Bennett is sent to the scene of an apparent suicide, but pretty soon, things don’t add up, and it starts to look like murder. Then the fingerprints turn out to be those of a dead man, but Bennett and Agent Emily Parker find their investigations obstructed by army bureaucrats.

This one starts off well, with plenty of mystery and some good investigation, but then Bennett makes the puzzling decision (for a seasoned detective) to drive off to Pennsylvania by himself on a lead. He follows that by putting an old man and his granddaughter in danger to save his own life. The twist that gets him out of trouble is just a bit too convenient, and the background story on the victim, just a tad far-fetched. Fans of the series may want to outlay cash for this little dose of Michael Bennett, but a library loan is a good alternative.