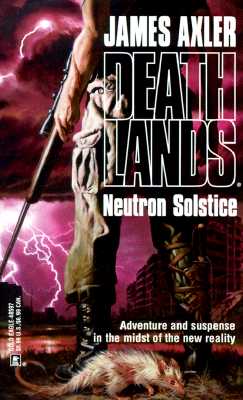 A generation after a global nuclear war, Louisiana is a fetid, sullen landscape of impenetrable swamps and grotesquely mutated wildlife. Above the gnarled bayous, radioactive red dust clouds race across the sky on nuclear winds; below, thick mud sucks at a man's boots. Now and then a biting acid rain falls, swept in on the boiling winds from the Gulf.
In the reeking swampland that was the Mississippi basin, neutron bombs have left barren cityscapes the terrirories of small groups of bitterly opposed survivors. Ryan Cawdor and his companions Krysty Wroth and J.B. Dix come upon one such group who are striving to revive life on earth the way it was before the bombs fell. But they're up against a postholocaust feudal lord who's just as determined to wipe them out.
In the Deathlands, the world blew out in 2001.
GraphicAudio...A Movie in Your Mind is a unique audio entertainment experience that features a full cast of actors, sound effects and cinematic music.
Publisher's Weekly says "Graphic Audio delivers an action and sound effect loaded audiobook that lives up to its tagline, A movie in your mind."
Audiofile Magazine says, GraphicAudio sets the gold standard for full-cast dramatizations, and new listeners will become instant fans.
Reviews from Goodreads.com