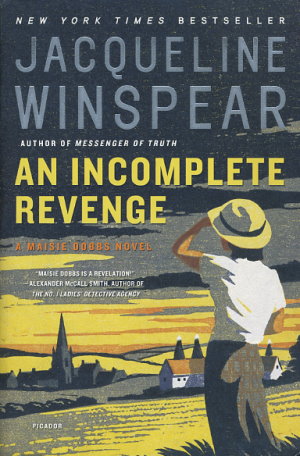 With the country in the grip of economic malaise, Maisie Dobbs is relieved to accept an apparently straightforward assignment to investigate a potential land purchase. Her inquiries take her to a picturesque village in Kent during the hop-picking season, but beneath its pastoral surface she finds evidence that something is amiss. Mysterious fires erupt in the village with alarming regularity, and a series of petty crimes suggest a darker criminal element at work. A peculiar secrecy shrouds the village, and ultimately Maisie must draw on her finely-honed skills of detection to solve one of her most intriguing cases yet.
Reviews from Goodreads.com

I love the Maisie Hobbs series. In this one the setting is Kent in the early 1930's. Maisie is finding enough work to keep her and Billie busy during the beginning of the Great Depression. Maisie is asked by an old friend to investigate a small village in Kent during the fall hop picking season. Her friend is considering a considerable business expense and he wants Maisie to take the pulse of the village. There have been an number of break-ins and fires in the village since the war ended about 11 years ago. During the war a large number of young men who were lost in the trenches, and a zeppelin destroyed a thriving business in the village, as well as the Dutch family who ran the bakery which was bombed. Maisie uncovers a lot of long-buried secrets with her dogged investigation. We see life in a small Kent village in the early 1930's, during the busy hop picking season, as well as the people who come to help with the harvest, including gypsy clans. I love Ms. Winspear's knowledge of her historical time, and the character development of all the characters, including the secondary characters. This is what sets such a believable stage for Ms. Winspear's stories.

An Incomplete Revenge is the fifth book in the Maisie Dobbs series by British-born American author, Jacqueline Winspear. James Compton, son of Maisie’s long-time patron, Lady Compton, is in the process of purchasing a large estate at Heronsdene, Kent for the family company, but some incidents of petty crime, vandalism and small fires in the area are cause for concern, so Maisie is engaged to conduct enquiries. It is early autumn of 1931, and as these cases all seem to occur during the hop harvest, it is especially convenient that her assistant, Billy Beale usually takes his family for a working holiday hop-picking at this time, and is able to contract to the farm on said estate. The waters are muddied, somewhat, by the influx of large groups of Londoners and gypsies, all taking part in the harvest, and the fact that the villagers of Heronsdene seem reluctant to involve the police or fire-brigade. It appears that the land-owner, Alfred Sandermere, is a poor businessman and not well-liked by his tenant farmers or the villagers. A theft from the Manor house, blamed on two young London boys, sees Maisie visiting the gypsy matriarch in search of information. Maisie notices that the mood in the village is unusual: there is an undercurrent of fear in addition to the resentment and suspicion that the presence of the Londoners and gypsies usually brings. It seems the villagers are still keenly feeling the wartime loss of many of their young men, and are strangely hesitant to discuss the Zeppelin raid that occurred in 1916. In trying to determine if this is a case of sabotage, insurance fraud, opportunistic theft by itinerant workers or something else entirely, Maisie’s investigations lead her to encounters with a determined journalist, a dishonest vicar, a loyal dog, some reticent villagers, a luthier and a very snobbish land-owner. She helps to fight a fire, learns to dowse for silver, attends two funerals, dances with gypsies, reconciles with an old friend and picks some hops. Winspear touches on school bullying, prejudice against gypsies and anyone who is different, mob mentality and, of course, revenge. Her extensive research into gypsy customs and beliefs and into hops and hop picking in the early 20th century is apparent in every page. This gentle-paced mystery has quite a twist in the tail: a shocking crime that only becomes apparent in the last few chapters. Once again, an excellent read that will have Winspear fans looking forward to the next book in the series, Among The Mad. 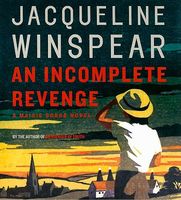 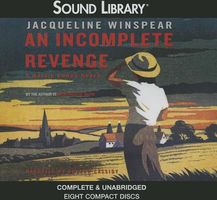