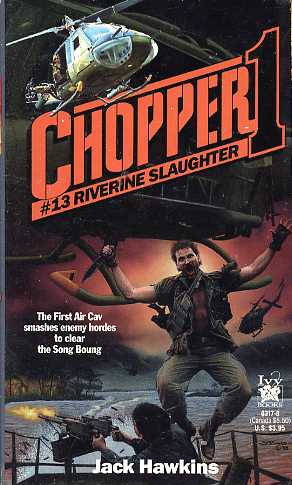 THE MEN OF THE FIRST AIR CAV
They were the cowboys of the sky -- the U.S. helicopter gunship soldiers who believed in what they fought for and laid their lives on the line.

BROWN WATER HELL!
When a Mobile Riverine Force patrol boat is savagely attacked on the Song Boung River, the sailors of the Brown Water Navy issue a desperate radio call for help. Flying in aboard their Huey gunship Pegasus, Sergeant Treat Brody and the Blue Team respond with a vengeance. In a bloody air-to-ground battle, the men of the First Air Cav beat back the enemy.

But the dense jungles along the shore are teeming with North Vietnamese troops. Brody and his men have barely finished off the patrol boat's attackers when a nearby Special Forces mobile guerrilla team is surrounded by hostile soldiers. Again the Blues rush to the rescue, turning the tide against the enemy in a furious...RIVERINVE SLAUGHTER
Reviews from Goodreads.com