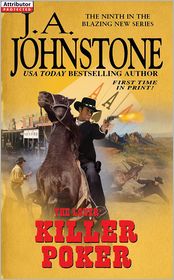 He came West in search of the truth. Out here, the truth is more than enough to get you killed. . .

Hunter And The Hunted

Conrad Browning had money, a manservant and a mission: to find his missing children and meet them for the first time. He's come as far as Denver, dodged a bullet from a beautiful assassin, and landed in a big buy-in poker tournament against a ruthless heavy-betting cattle baron with a plan of his own--to take this city slicker into the wilderness, and hunt him like an animal.

But Rance McKinney doesn't know who he is facing. The son of legendary gunman Frank Morgan, Conrad goes by the moniker of the Loner. Now it's the Loner against McKinney, the hunter and the hunted. And when he's cornered, the Loner is the most dangerous beast of all. . .
Reviews from Goodreads.com