The Happy Turning & Mind at the End of Its Tether — H.G. Wells 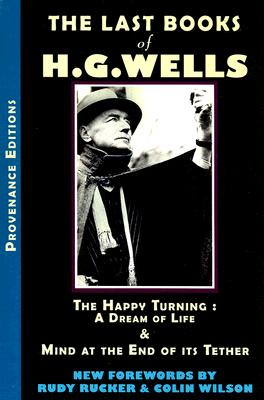 This volume contains the two last works by HG Wells. Nearing the end of his life, increasingly distressed over the war, Wells deals with death and apocalypse, mortality and religion, and with “human insufficiency.”

Mind at the End of its Tether

“One approaches it with awe. You come across references to it everywhere: Colin Wilson, Priestly, Koestler. It seems to have been a wounding work; something no one could agree with, but something that couldn’t be taken lightly.”—Art Beck

“In the face of our universal inadequacy . . . man must go steeply up or down and the odds seem to be all in favor of his going down and out. If he goes up, then so great is the adaptation demanded of him that he must cease to be a man. Ordinary man is at the end of his tether.”—HG Wells

Wells’ barbed fantasies about the afterlife take the forms of “happy” dream walks. In one he converses with Jesus:

But being crucified upon the irreparable things that one has done, realizing that one has failed, that you have let yourself down and your poor silly disciples down and mankind down, that the God in you has deserted you—that was the ultimate torment. Even on the cross I remember shouting out something about it.”
“Eli. Eli, lama sabachthani?” I said.
“Did someone get that down?” he replied.
“Don’t you read the Gospels?”
“Good God, No!” he said. “How can I? I was crucified before all that.”
Reviews from Goodreads.com