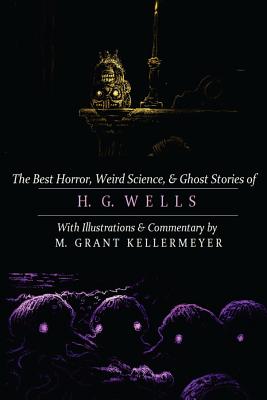 Our mission is to provide the world with beautiful, accessible, illuminating editions of classic horror fiction, introducing these chilling gems to new generations, making them gorgeously illustrated and giving you critical, historical, and artistic insights with every single story. This is one of those books. The only illustrated collection of Wells' horror fiction currently on the market, this anthology begins and closes each story with informed critical commentary and uses crisp and unsettling illustrations to usher its reader into Wells' stark and dangerous Darwinian world. H. G. Wells has been rightfully called the father of modern science fiction, bringing a level of discombobulating other-ness to his fantasies which would be borrowed in the fanciful horrors of H. P. Lovecraft, Ray Bradbury, and Stephen King. While his name is more closely associated with science fiction, his contributions to supernatural fiction, body horror, murder tales, dark mysteries, ghost stories, and weird fiction were brilliant. Containing Lovecraft and Bierce's cynicism, his writing is nonetheless freshened by his Darwinian education -- one which foresaw a universe crawling with hostile (if seemingly innocuous) competitors: man-eating squid, vampiric orchids, greedy demons, ghostly moths, and Innsmouthian fish people. The tales included herein are guaranteed to surprise, disturb, and haunt. TALES INCLUDED in this ANNOTATED EDITION: The Moth | The Red Room | The Stolen Body | Pollock and the Porroh Man | The Inexperienced Ghost | The Door in the Wall | In the Abyss | The Sea Raiders | The Valley of the Spiders | The Late Mr Elvesham | The Flowering of the Strange Orchid | A Dream of Armageddon | The Cone | The Magic Shop | The Country of the Blind
Reviews from Goodreads.com